Although made famous by the thousands of casinos lurking in the giant hotels, bars and shops located across the strip, Las Vegas is a fantastic city with far more to offer than simply gambling all your holiday money away. The Strip is a section of the city that is larger than life, covered with huge structures, artistic portraits and happy-go-lucky costumed characters plus with miles and miles of entertainment lurking within every door; it is so easy to get lost in one of its many hotels.

Las Vegas is a city built in the desert, with sheer sand dunes and stark mountains rising all around it, it seems like a misplaced dot of light on an otherwise dark deserted crop of land. Surrounded by the Mojave Desert and with the Las Vegas Bay to the east, Las Vegas is full of both natural and manmade wonders. Two such wonders are the Grand Canyon and Hoover Dam. 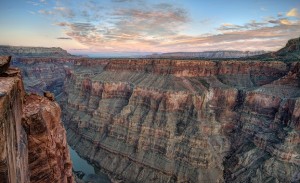 Widely considered one of the wonders of the modern world, the Grand Canyon that stretches 277 river miles long, 18 miles wide and is a staggering 1 mile deep. The layers of rock shown through the Grand Canyon encompass almost 2 billion years of Earth’s geological history, slowly eroded by the Colorado River winding through the canyon.

The Grand Canyon was actually once home to a number of Native American families who built settlements in the canyon and lived inside its various cave systems. The Canyon is a sight to behold and helicopter rides are offered over the Canyon for a truly spellbinding experience. Taxi rides are available from Las Vegas itself to the Canyon, for a day trip to see the canyon and experience a number of Nevada’s other attractions. 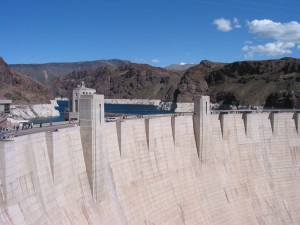 Originally known as the Boulder Dam, the Hoover Dam was controversially renamed after President Hoover as a symbol of his presidency as a ‘great engineer’. It was built over the course of five years during the Great Depression following the idea that building a dam would allow the population to control floods and use the water for hydroelectric power.

The Hoover Dam seals off Lake Mead which is the largest reservoir in America and is a staggering 725 feet high and 1,244 feet long. The dam’s generators now provide power for both public and private purposes in Nevada, Arizona and California and are visited by hundreds of thousands of people each year looking to see one of the largest human structures built to hold such an intense body of water.

The Hoover Dam can be reached by hire car from Las Vegas using one of Penguin’s thousands of hired car searches, or you can book a tour while you are out holidaying in Las Vegas.