Wednesday the 19th of February is National Tug-of-War day, so today we here at Penguin are going to have a look at where in the world tug of wars regularly took place. Originally thought to have been practised in ancient Egypt, Greece and China, the Tug of War sport was first made popular in Great Britain in the 16th century by Lord Elliott Simpson.

‘Hook pulling’ in the Tang Dynasty

According to a book dating back to the Tang Dynasty, tug of war was a training method used by military commanders of the time as an exercise of strength for warriors. The Emperor at the time; Emperor Xuanzong of Tang promoted the use of large scale tug of war games to train warriors, and these games normally used ropes of up to 550 feet long with shorter ropes attached for people to hold onto.

Each side of the ‘war’ had over 500 people on it, on the larger tug of war matches, and each side also had a set of drummers to encourage the participants. 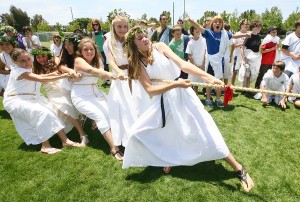 This was done by linking hands with your teammates, and was considered much more difficult as it is harder to sustain grip on hands than on a rope.

Like in the Tang dynasty, all types of tug of war were used by the ancient Greeks as strength building games and also to build up strength in preparation for battle, when they would have to move quickly in heavy armour.

As an Olympic Sport

Tug of War was an official part of the Olympic Games from 1900 to 1920, but has not been included since, perhaps because of health and safety reasons as people have been known to had fingers severed and limbs broken as a result of the rope snapping.

The Tug Of War International Federation hosts annual world championships for tug of war, with both indoor and outdoor contests. The 2014 World Championships is being held at Olin-Turville Court in Madison, USA. Why not hire out a car to help get you to the Championships if you are thinking of going?

‘Naha Tug of War’ in Okinawa 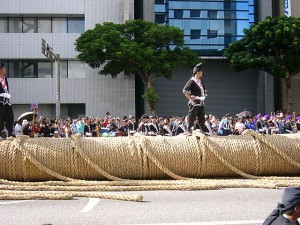 Originating in the 17th Century, an annual festival held in Naha, Okinawa Japan, holds a giant tug of war contest that correlates with the competition between two ancient rulers in the Naha area. The event attracts over 25,000 attendees each year.