Whether you are a fan of piglets, boars or just like animals in generals, today Penguin has an ideal Bucket list item for you. Pig Island in the Caribbean is a tiny little island where feral pigs live and breed in peace. This iconic island is full of pigs of all shapes, sizes and colours, and although the pigs are feral, they are pretty content with having human visitors.

Officially known as Big Major Cay, it is said that the pigs were originally dropped off by a group of sailors who wanted to eventually return and cook them, but in the end this apparently never happened. The pigs somehow managed to survive by scavenging, and now live happily while being fed by the islands tourists and nearby locals.

As the island is surrounded by clear waters, most of the pigs learn to swim from a very young age, and even small piglets can be seen swimming easily around the coast. Many of the pigs are even strong enough swimmers that they are quite contented to swim alongside people.

They have even been known to swim out to approaching boats to greet newcomers, and to sniff out for a snack or two. With nothing else to do but lay around snoozing all day and catching the sun’s rays, these pigs certainly live the high life. 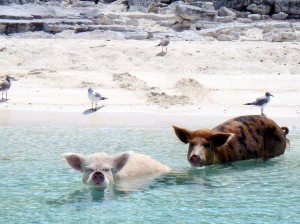 The pigs are quite content to sit around, and don’t mind tourists taking a photo or two, they are even perfectly happy to swim alongside a camera, or behind it. There are a variety of tours available which will take you directly to Pig Island, and a variety of different natural wonders around, and are available at different times during Summer and Winter.

Take time out of your busy schedule to visit these lovely little porkers, and snap a shot as they bask and swim in the clear waters of the Bahamas by hiring a car in the Bahamas.

The island is said to be home to around 20 pigs and piglets of varying sizes and markings, and as well as feral pigs, there have also been sightings of a few stray cats and goats located on the island too. There are a number of freshwater springs on the island, and the pigs make a happy living scavenging food from locals of nearby islands, and being fed by tourists.

Did you want to create your own Bucket List? Why not have a look at ours for some inspiration!